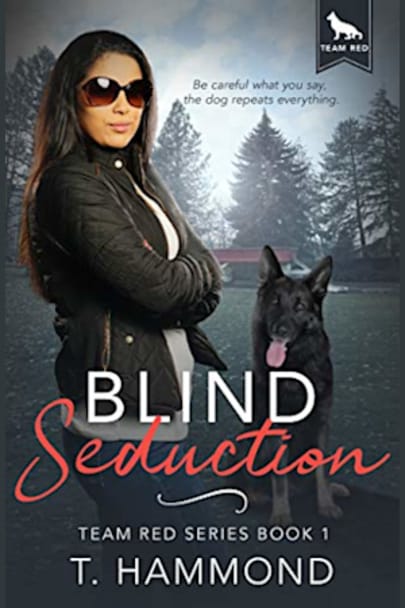 An accident changed Teresa March’s life. Within a heartbeat, she lost her sight and her independence. Her scars are still healing when life takes a turn for the better and she receives Red, a companion German shepherd, from her friend Janey.Red is a typical dog…well, except for the whole talking-in-Teresa’s-head thing. They develop a bond, forged with humor, love, and not just a little snarky … little snarky sarcasm.

If a smart-alec dog isn’t enough to hold your attention, Sebastian and David came to town and both have set their sights on Teresa. Neither of the sexy ex-Navy men are above using military tactics to secure their target–and so begins the siege of Teresa March.

When you stop drooling over the two gorgeous men, consider the implications of a talking dog…the police department certainly has.

This edition also contains the novella “In Love with Teresa March” which tells of events in Blind Seduction from David and Bastian’s PoV.

I found this book incredibly refreshing. I have no problem with the usual formula, but once in a while, an unusual idea (well done, of course) is very appreciated.

Teresa and Red have a hilarious relationship. Red who’s probably the best character in the book, is a very witty and snarky dog, but still, the author makes it believable as to that being an actual dog’s thoughts… (though I did expect for him to suddenly shout “Squirrel!”)

Now, I’ve made my opinion about love triangles very explicit, but in this case, I found myself wishing for one xD.

Teresa’s best friend and childhood companion has a pig of an older brother who’s in the military, Bas. While Teresa grew up to hate him, we later find out that he had been pretty much in love with her for years. For the last three years, he’s shared his sister’s correspondence (and photos) with his friend and colleague David. So of course, David also is pretty much in love with Teresa. When they retire from the corps they both decide to go after her.

I wished so hard for this story to turn into a committed MFM ménage, but, alas! No such luck. So the story basically goes on with Teresa and Red learning to use their special gift. And David and Bas one-upping each other to win over Teresa’s heart.

It’s well written, has excellent dialogue and it’s fairly fast-paced. When everything is mostly settled though, it becomes a bit stationary… like the book is still going on while the plotline has already finished. But I took that as a very extended epilogue, so it actually didn’t bother me that much.

As this was free on Amazon at the time I read it, I consider Blind Seduction a true gem. It was a laughing out loud kind of read and it just put a smile on my face. The sexy bits were seriously hot, and the secondary characters were great. All in all, to me, a highly recommended read.

I’m seeing there are a couple more books to the series and I’m very eager to see how everything turns out because I read “betrayal” in one of the blurbs, so I’m thinking the other H is going to get his chance…though that’ll be a bummer as I really liked the one she chose.

Maybe it’s not too late to write to Ms. Hammond and ask her to change the story to a ménage one?

It was almost perfect

The love triangle was awesome. It’s everything a love triangle should be. I love David and Bas. My only notes are she written like a white woman and while the adoption cops out of a working knowledge of Asian culture. Asian girls are still fetishized and stereotyped by white guys from an early age. Theresa never brings that up in her criticism of Bas even after she learns he started lusting after her when she was fifteen. There is a lot of repeat prose, so that didn’t thrill me. And the lack of a cohesive plot was noticeable. Overall, I’d love to read the second book just to see where it goes

In a funky cross between romance and magical realism, Teresa has a freak accident that leaves her blind but able to talk to her dog Red. Red and Teresa have their fair share of champions to help them navigate the changes to their world. Janey, Teresa’s childhood bestie, is a mainframe in her life. Janey’s brother, Bas, comes home from his military career with his best friend and business partner David. David and Bas spend a colorful month competing for Teresa’s heart, but David is the front runner from the first because the dog likes him best. Teresa’s nurse companion/house husband Ken keeps the house running while helping Teresa navigate a sightless world. As Red and Teresa test out their bond, Detective Gil joins their circle as they work quietly with the local police department on various cases. David and Bas’s security business and military experience may be tested in the future because there is a leak in the PD about Teresa and Red’s unique gift. I’m looking forward to more of this series!