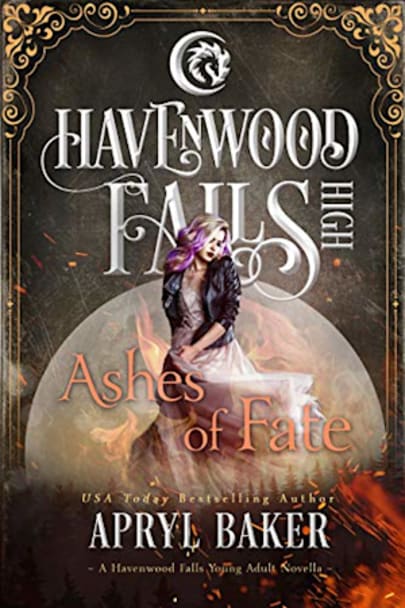 Or so she thought.

Her grandmother reveals that what happened to her family wasn’t an accident. They were murdered, and the two of them fled to Havenwood Falls and the safety it offered. The secrets of her family’s past are revealed, leaving Cora to question everything.

Now she’s not only dealing with guilt, but she must worry about becoming a victim to the same person who took her family from her. She’s scared and falling apart.

Until she meets Reed Spencer.

He seems to understand the dark place she’s in and brings a little light into her life. He’s the one person she can turn to, and he’s quickly becoming not only her friend, but something more.

But she’s not as safe as she thinks, and it will take the magic of Havenwood Falls to save her.

Welcome to Havenwood Falls, a small town in the majestic mountains of Colorado. A town where legacies began centuries ago, bloodlines run deep, and dark secrets abound. A town where nobody is what you think, where truths pose as lies, and where myths blend with reality. A place where everyone has a story. Including the high schoolers. This is only but one…

This is a stand-alone Young Adult urban fantasy in the Havenwood Falls High series of fantasy stories featuring a variety of supernatural creatures. The series is a collaborative effort by multiple authors. Each author’s story is a stand-alone, so you can read them in any order.

I loved this novella. The characters are amazing you can see Apryls writing shine through but like all the stories you fall in love with the characters and then it ends leaving you wanting more. Won’t stop be from reading the other authors amazing stories and falling in love with their characters. Only downfall is they’re all short and you always want more!

I loved this story. I haven’t read any of the other Havenwood Falls books yet, so I wasn’t sure what I was getting myself into, but def worth the read. I know I’ll be going back and starting the series from the beginning and find all sorts of great authors that have contributed. Cora has just lost all of her family except her grandmother, and together they are uprooted to a new town that will hide them from they person who had her family killed. Cora doesn’t know about a long family secret that may get her killed too.

This is another great addition to the Havenwood Falls High world. Seventeen-year-old Cora Hartwood’s world falls apart when her parents and brother die in a car accident. Crippled by survivors’ guilt, struggling with revelations about her family and fearful for her life, she tries to begin a new life in Havenwood Falls but things don’t go as smoothly as she hoped. This story draws you in from the very start and your heart breaks for Cora and what she endures and what she must face, but some brightness does enter her life, in the form of Reed Spencer. This is a fast paced, entertaining read with some romance, twists, thrills and surprises. A great stand alone addition to this multi-author series.

This was my first Havenwood Falls adventure and I can’t wait to meet more of the residents. I am hoping there will be a sequel so I can see how Cora transforms

This book is so full of feels, I cried and laughed and cried again. A truely emotionally charged read, and I couldn’t stop laughing about the brown painted walls. Cora’s story is full of tragedy, anxiety, and learning to move on when you’d rather stay laying in a nest of blankets and pillows forever.

I’ve read several of the Havenwood books and this one is my favorite! Apryl builds believable, likable characters and you want to know them better.
If you haven’t read any other of the series, it’s ok…this can be stand alone.

Oh my, this one is a tear-jerker. Cora and her grandmother have lost so much in a short time. The move to Havenwood Falls for a new start and some safety. Cora is struggling not only with her losses but also with guilt. Reed is a sweet guy that works at the inn and offers to show her around town. One day, things go horribly wrong.
I loved this one so much. Cora is hurting so much, and just trying to get through each new day. I was surprised at the ending and thought it was so wonderful. I really hope that we get to see more from Cora, her grandmother and Reed in the future!!

I liked this book. I can’t wait to read the rest in the series.

What a great addition the the Havenwood Falls series! Loved it and can’t wait to see what comes next!