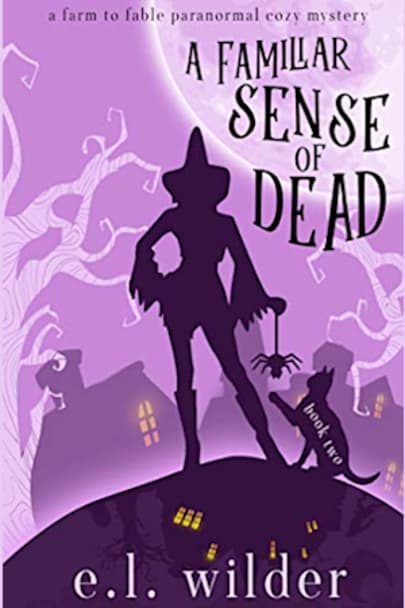 Hazel Bennett is just one hexed haystack away from a nervous breakdown.Between learning to control her magical abilities, forging a partnership with her snarky familiar-to-be, navigating a complicated relationship with her old high school flame, and wrangling an ornery unicorn running amok on Bennett Farms, she’s stretched thin.To make matters worse, somebody had to go and get murdered. Twice.Now … and get murdered.

Now it’s up to Hazel to investigate the mind-boggling murder and find out what the victim did to earn a duplicate death. But that the means leaving behind her quaint New England village and venturing through the portal hidden deep in the Tanglewood–and stepping into the strange, mystical world that lies just beyond.

The threshold she’s long been forbidden to cross.

A Familiar Sense of Dead is the second book in the Farm to Fable Paranormal Cozy Mystery series. The story is packed with spellcasters, mythical creatures, and all the things that make Vermont a quirky little state. The tales are sometimes deadly serious, sometimes deadly funny, and sometimes just deadly.

Hazel follows her familiar Clancy through the Postern in order to address a murder.

Working with friends and family they make great inroads in understanding the connections to Quark and to magic.

Helena has been working on her magic since the her magic fight with Ronnie. She is working with Clancy every morning. They have not mastered the relationship of of witch and familiar as of yet. Helena is also busy working on helping out. Helena sent her sister and her husband on a vacation.
Helena is also working closely with Tyler getting the interlopers back where they belong. There is one that keeps eluding them. Helena finally sees the unicorn and it is not like the ones from her childhood.
Clancy gets a letter saying on of his friends has been murdered. He wants to leave immediately, Helena wants Charlie to come. Charlie can’t take time off from work. So it will Helena and Chancy.
They make it to where Clancy’s friend Silas was murdered. The way he was murdered throw the both of them. When Helena is caught by Alex, he takes her to the council. She will have to talk her way out. Helena will have to rely on her magic, her gut instinct and a new partnership in order to survive. But someone will betray her.

This was a really good story, there was some many different elements to the story. Clancy’s past in Quark, Helena and her unique magic. The murder mystery that is going on. I really enjoyed reading this and seeing the characters develop. Looking to more from this series. I recommend reading this, it really is a fun and fast paced read.

I received a complimentary copy of this book and this is my honest and voluntary review.

Spiders, spiders! I hate spiders and there was a werespider in this book! Hazel is coming along really slooowwwllyy with her training and making Clancy her familiar. But, when Clancy is told that someone he know has been murdered in Quark, well Hazel has to rely on what she knows to help Clancy find out what happened. Paired up with a witch on probation the two of them begin trying to figure out what is going on in both their worlds. Secrets and deceit abound and I was blindsided as to who the werespider was. I totally guessed wrong! Hazel is a fun character and I liked how Tyler is becoming a more important person in the books.

THIS IS BOOK 2 OF FARM TO FABLE PARANORMAL COZY MYSTERIES SERIES. BOOK 2 HAD A WELL WRITTEN PLOT THAT PULLS YOU INTO THE STORY. I LIKE HAZEL AND THE CHARACTERS ARE WELL DEVELOPED. IF LOVE COZY MYSTERIES THEN I RECOMMEND READING, YOU WILL NOT BE DISAPOINTED.

Hazel has come to terms with her knack. She and Clancy, her not-a-cat non-familiar, travel to Quark in response to a surprising tragedy. E. L. Wilder has an upbeat writing style that I enjoyed and I could not have predicted the ending.

Hazel is the heir to a strong witch power that lies in her family. But she is a late bloomer and still struggles with the basics – and with forming the bond of familiar with Clanceym a creature that had familiar ties to her family over generations.
While they are practicing Clancey receives a message that one of his closest friends had been murdered and as he does not trust the town council of the mirror town full of magic, he is asking Hazel to help him find the murderer.
With that a new chapter begins for Hazel, learning a lot about herself, her magic and a serious problem facing her world as well as the mirror world.
The walls separating the two worlds have fissures and people going too near become split in two or worse, become something new entirely.
Figuring out how to stop the fissures and a killer, who is on the lose in both worlds keeps her busy.
A wonderful story with lots of original ideas and quite surprising endings that kept me enjoying the book to the very end.
I received a free copy of this book via Booksprout and am voluntarily leaving a review.

This book is totally unexpected. It made me laugh in places, surprised me in others and was a very good read. Witches, Familiars, a magic land and a murder are all included in this book. I liked it and would recommend it.

Hazel Bennett is a witch still learning to control her magic and to bond with her familiar Clancy. She needs to cross over to Quark, an alternate dimension she has been forbidden to go to. Once there she finds herself appointed by their council and does her best to solve a few magical murders. I received a free copy of this book via Booksprout and am voluntarily leaving a review.

Hazel has settled back into the family farm, sending her sister and brother in law on holiday to rest she is getting back into the way of living with the chores to do, she is helping to send any vermin that comes through the portal, and she has to bond with her familiar to ensure she comes fully into the knack. The magical powers gifted (or cursed depending on your point of view) to one female each generation of the Bennett Women.

This is a really good sequel we finally find out what lies beyond the portal, And with it a murder, I finally understand a bit more about this world now, I still have questions but I do not feel I am floundering quit the same. E.L. Wilder has fleshed this world out and it is magical, I recommend this book it is very good the writing is good the characters are growing on me, And I have been left wanting more, Always a good thing!

3.5 Stars
This is an entertaining book with a good flow to the story. The character work is great. I found myself laughing several times throughout the book. Looking forward to see where everything and everyone go.