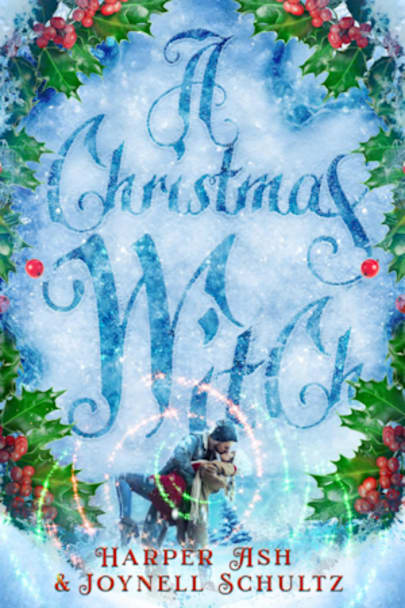 For Noah Hamilton making it through Christmas isn’t about dealing with annoying relatives, putting on ugly sweaters, or avoiding eating pounds of fruitcake. It’s about hoping to live to see the next day.But this year is the last he’ll spend living in fear of his grandmother’s curse. He’s ready to move on with his life, marry his perfect girlfriend, and NOT DIE! Avery has spent years avoiding the … years avoiding the ghosts of her past. Both the dead ones stuck between this world and the next. And the very much alive one who ripped her heart out when he left years ago without a word.

Now Noah Hamilton has the nerve to show up on her doorstep, claiming he knows she’s a witch and needs her magic to help lift a curse threatening to claim his life on Christmas.

She wants nothing to do with him. He needs a bit of Christmas magic. Neither of them want a second chance. Or do they?

I loved this book!! I couldn’t put it down until I was finished! It’s a great story of love and second chances!

The writing is top-notch and I wholeheartedly recommend it to young adults and adults alike!
The authors are to be congratulated on crafting a book which will strike a chord with all who have loved and lost and how they may have felt if they’d run into that person again in later life. Can the bitterness be put aside if that person comes to them for help or even if they meet on a sidewalk or in a store? That is a tough question because heartbreak is a very personal thing for us all and we may react differently.

I wholeheartedly recommend this book!! It’s perfectly timed to come out in the season of love and forgiveness as we celebrate the ONE who gave a free gift to us all! May we all emulate HIS example in our daily lives!

Kudos to two fine authors who have crafted a wonderful feel good story for this season or any time of the year!!

You’ll Want to Remember the Name Joynell Schultz, as Her Work Shouldn’t Be Missed!
WoW! If you haven’t Read anything from this Amazingly Talented Author, then you Really NEED to give Joynell a Chance. I Grow More & MORE impressed with Her Work, as I Read each Consecutive Book, & TRUST Me when I say that, THAT Doesn’t happen often!
He’s cursed to Die on Christmas…
And He thinks He can come BACK ask’n “A Christmas Witch” for the Remedy,
Such NERV~ Com’n from A Guy who Once Upon A Time Held Her Heart & Broke IT without thought…
Should She CARE, Should She TRY, or Should She CRY!?!
Well as “A Christmas Witch” there’s NOT Much choice…
But it’s what happens NEXT that tells the Tale of “A Christmas Witch,”
Which might be putting “A Christmas Witch” ON the Road toward finally gett’n an HEA!
I rarely give Coveted 5 STAR ratings; they’re saved for Books/Items that Outshine, Outclass, & Outperform their competition… They’ve gotta give me something MORE! Joynell Schultz’s won that Distinction for “A Christmas Witch!” Kudos Ms. Schultz for your Stellar work!!
I was granted, via B00|{$P®0UT, an ARC of Joynell Schultz’s “A Christmas Witch.” I recommend this book to others based upon its own merits. All opinions expressed within this review are uniquely my own & freely given!
Until next time… Happy Reading!
If My Review is helpful to you, please check the box below~ Thank You.

A one-day, PG15 contemporary Scrooge tale, poor editing of my early ARC kept it from the five stars the plot deserves. This voluntary review is my own opinion.

Again, Joynell Schultz has created a sweet romance that resonates. This one takes two people trying to emulate Ebeneezer Scrooge through their personal versions of the visions of Christmas Past, Christmas Present and Christmas Future before bringing them together in a second chance for happiness. Loved it!.

Noah and Avery’s relationship is in the past. That’s where it needs to stay. Except Noah is destined to die at Christmas without the help of a witch and it so happens that Avery is a witch. So do they dare to tempt fate and destiny and try for a second chance? Fun and exciting story

This is a fun second chance story that is well-written with characters that realistic and likable. These Characters are witty, enjoyable, romantic and full of love and you want to know them. The story if full of twists/turns, ghosts, magic, fear, romance and it is a must read

Do you believe in second chances? Of course you do! Don’t we all? Take a chance on having a wee tug at your heartstrings and go for a heart warming ride that will pull your emotions all over the place! After all, Christmas is for dreaming…and sometimes those dreams come true! Enjoy!

This is a story about a reunion eight years in the making, a reunion neither Noah or his ex-girlfriend Avery is really interested in having happen. But Noah needs help and Avery is the only person who can help him, but will she?
A Christmas Witch is a quick read, but a well rounded story that left me wanting to see more books written about these characters. A great story about second chances.

A near death near accident made him think of the woman he never followed, not the one asleep in his bed.

He tells himself he only wants her help so he can be free to marry his convenient and well matched girlfriend. Could they both have other feelings in their hearts? Love alone would not be enough.

Can a little magic move them ahead into a different future?

Avery Jones and Noah Hamilton’s second chance at love. Noah was cursed by his Grandmother and he will die by his next Christmas, he comes to Avery for help. I enjoyed reading how the curse gets broken. A well written story with a good storyline the story flowed smoothly across the pages. I received a free copy of this book via Booksprout and am voluntarily leaving a review.

Christmas stories are the best. A Christmas Witch was one of the most enjoyable ones I have read. Avery and Noah are two lost souls wandering through life. They had what many look for all their lives, true love. But, Noah and Avery lost what they had. Can you find true love a second time? You will have to read this book to find out. There are plenty of twists and turns in the plot; plus ghosts, magic and lots of fear of breaking hearts. This story was sad and happy at the same time. Add to your TBR pile today.

I love a book with a bit of magic, some ghosts, a sweet heroine and a self centered hero. As with all of Joynell Schultz books, it is well done, great plot and characters, and totally worth reading.

I really liked this book. A cute story that left me wanting more of the characters. I can’t wait to read more of what happens to Noah and Harper!